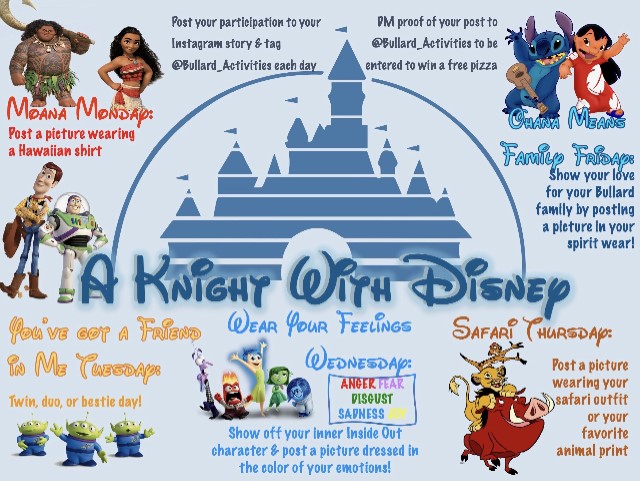 Bullard High School will be hosting a virtual homecoming week in order to maintain school spirit during the lockdown. The event will be in video format, and will be held from March 8th-March 12th.

The parade is “A Knight With Disney” themed and will feature a showcase of miniature “shoebox floats”, created and submitted in photographs by students, clubs, or sports teams through Google Forms. The deadline for submission is February 24th.

Prizes will be awarded to the creators of certain floats in accordance with the following merits: best representation of Homecoming theme, most school spirit, and most creative.

A video compilation of the “shoebox floats” will be uploaded and shown in Advisory class on March 8th.

Alongside the parade, this year’s virtual Homecoming will also be crowning a Homecoming King and Queen for each grade. Candidates for each respective year have already been nominated by their classmates through Google Forms.

During Homecoming Week the Kings and Queens will be announced on Instagram Live (@bullard__activities) during lunch as per the following schedule. Freshman crowned on Tuesday, Sophomores crowned on Wednesday, Juniors crowned on Thursday, and Seniors crowned on Friday.

Emails with additional information have been sent out to the student body by Heather Sanders, Campus Culture Director. “If you have any questions regarding Homecoming, please email me at [email protected]” says Sanders.