Getting to know Vice Principal Perez 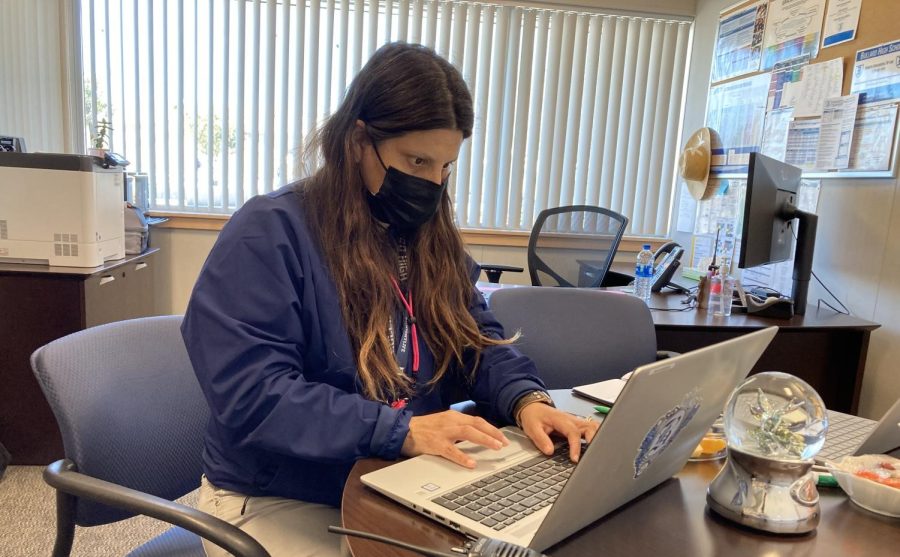 Bullard High School is filled with great staff, but one has a heart-warming story of why she wakes up every day and comes to work. Vice Principal Perez was born in Sinaloa, Mexico.  She was raised by her grandmother until she was 3 years old, because her mother was in the United States seeking employment to give her family a better life. She was sent across the border illegally to get to her mom whom she had no memory of. VP Perez was called “La Muda”, meaning mute in Spanish, as a child because she was with a mother she really didn’t know, in a new country, and didn’t know how to speak English. She went to Kirk Elementary where she began to learn English through the support of her teachers. By the end of first grade Perez knew that she wanted to be a teacher. Throughout her education, Mrs. Perez’s teachers guided and molded her, especially her high school English teacher, Mrs. Sanders, at Roosevelt High School.

Mrs. Perez has a son and daughter who are involved in Soccer so most of her weekends are filled with their games and practices. In her spare time, she likes to scrapbook, but since becoming a VP there hasn’t been much time for that. An interesting fact about Mrs. Perez is that she’s a sneaker-head. She has over 385 pairs of sneakers.

Mrs. Perez has been an administrator at BHS for 3 years. She shared that her brother was labeled a “bad kid” which has caused problems for him throughout his life, so VP Perez does not believe in labeling kids as “troubled” even when students are disciplined. “I saw what that label did to my brother, and I would never want to do that to a student,” stated Perez.

Mrs. Perez is the VP over the following Departments: English, Career Technical Education, and Campus Culture. She supports teachers in those departments and does evaluations as well. Administrators have supervision duty weeks and Mrs. Perez stated that her days start a 7:00am and sometimes don’t end until between 10:00pm to 11:45pm.  Supervision duty includes all sporting events, plays, concerts, and essentially any event where Bullard students are involved.

Mrs. Perez is also the academic VP for students with last names F—L. Being an Academic VP means that students can go to her for help or support with anything they need. “I am here to help my students to succeed,” she stated.

VP Perez stated that there were positives and negatives about being a vice principal. The good aspects of being a VP are getting to see student mature over their 4 years at Bullard and seeing then walk across the stage to graduate is an amazing experience. The negatives are the drama that comes to school through social media. “That’s what causes most of the fights on our campus,” she stated.

VP Perez has a message for BHS students: “Enjoy coming to school. Be engaged, join a club, sport, drama, choir, band, journalism, etc. Everyone is in such a hurry to leave and go on to the next part of their lives, but what they don’t realize is that next chapter of their life is for the rest of their life. Take time to stop and smell the roses while you have the chance.  These can be the best days of your life.”